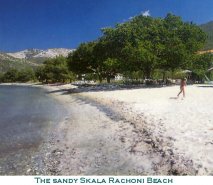 Thassos, "The Green Island", is situated in the gulf of Kavala, in the northern part of the Aegean Sea and its the closest one to the mainland of
Greece (8 km). One can reach Thassos only by a short ferry trip from the mainland cities Kavala or Keramoti.
The beauty of Thassos combines the rich vegetation of the pine-trees and olive groves, the crystal-clear waters, the traditional village lifestyle, archaeological sites, modern shops and night-life, all found on one island.

The holiday-makers can enjoy the long sandy beaches, the old mountain settlements and the picturesque fishing villages of Thassos.
There is a main road all around the island (98 km) that follows the coastline and smaller roads that lead to the mountain settlements.
There are many restaurants, tavernas and bars everywhere and traditional festivals are arranged by the locals. In summer-time you can watch theatrical performances or concerts in the ancient theatre or agora of Thassos town. 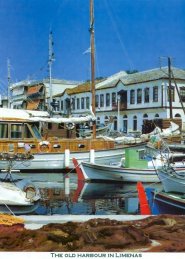 Thassos has been chosen among the 100 places of high and archaeological interest in the Mediterranean.
The island is connected to the Greek myths and one of them says that god Zeus abducted the Phoenician princess Europe. Europe's prince Thassos started searching for her everywhere and during one of his trips he discovered this island and settled down here and the island was named after him.
The wonderful climate, the rich pinewoods and the white marble of Thassos attracted the Phoenicians to colonize it around 1.500 BC. Before the Phoenicians arrived, the Thracian had been the first inhabitants of the island. The human traces of life date back to 2.000 BC. Thassos was also the legendary land of the mythological Sirens.

The first Greek colonists of Thassos were the Parians, who came in 700 BC with their leader Telesicles, after they received an oracle from the temple of Apollo in Delphi. They mingled peacefully with the previous colonists and they became very powerful, especially in commerce and navigation.

The prosperity of the island was continued in the Roman years, when Thassos had many privileges in commerce and was almost independent. Examples of the architecture and crafts of the ancient Greek, Roman and early Christian period are exhibited in the museums and the archaeological sites of Thassos.
The island was one of the first places in Europe where Christianism spread early, after the visit of St. Paul to Philippi in 49 AD. Hundreds of churches and chapels commemorate this event.

The city of Thassos - Limenas - is the capital and main port of the island, built on the site of the ancient town, overlooking its three harbors.
There are many places of archaeological interest that one can visit here: the ancient market (agora), the acropolis, the city walls and various sanctuaries scattered among the modern houses. The most picturesque part of the town is the old harbor with the fishing boats and the tavernas by the sea.

A range of mountains (Ipsarion, 1204 m.) divides the island into two different parts. The northern and the eastern part are mountainous, covered with pine-trees and the rocky cliffs form sandy beaches in between them. Its the perfect place for mountaineers and walkers.
The southern and western part is flatter, covered with olive-trees on the hills and most of the settlements are found here.

Driving from Thassos town to the east, the closest secluded beach is Makryammos, also within a walking distance from the town. Some of the most beautiful places on the island are the traditional villages of Panagia and Potamia, overlooking the famous Golden Beach and Skala Potamias. This is the longest sandy bay of Thassos (3,5 km) and a well-organized touristic site.
In the village of Panagia one must visit the old church of the Virgin Mary and in Potamia the museum of the local sculptor Vagis, who became famous all over the world.
Further on, one can drive to Kinira, a quiet settlement with a pebbled beach, where the ancient town of Kinira and the gold mines used to be, Next to Kinira is the breath-taking Paradise Beach, known to the nudists, surrounded by rich pinewoods.
As we reach the southern part of the island, we arrive at Aliki, a small peninsula embraced by two natural bays. In Aliki, one can visit the ancient sanctuary, the Early Christian churches, the ancient marble quarries and swim in its clean waters.

The next place is the Archangel Michael's Convent, situated high on the edge of a cliff, with a fantastic view of the sea. Nearby the Convent is the 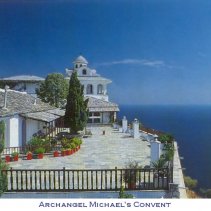 isolated beach of the Archangel.
On the southern cape of the island is the famous beach of Psili Ammos, covered with fine sand. Along the southwestern coast there are three settlements: Potos, Pefkari and Limenaria. All of them are well-organized touristic resorts. From Potos there's a road that leads to the charming traditional village Theologos, the old capital of the island, and to Limenaria, the second town of Thassos and the main port of the south, with many neoclassical buildings from the beginning of the 20th century. Next to Limenaria is the wonderful beach of Tripiti.

As we drive along the west coast, we come to many seaside villages, "Skalas" (fishing ports), like Skala Maries, Skala Kallirachis, Skala Sotiros, Skala Prinou and Skala Rachoni. All of them were inhabited in the 20th century and were named after the older mountain villages of Maries, Kallirachi, Sotiros, Prinos and Rachoni that one can reach by driving the mountain roads.
In the old mountain settlements one can admire the traditional architecture, the narrow cobbled streets and enjoy a cup of Greek coffee in the Kafenion (Greek cafes) of the square, the centre of the social life at these places.
On the northern part of the island, just a few kilometers from Thassos town, little picturesque bays are crowned by pinewoods that hide them from the main road view.
Each one of the beaches and villages of Thassos has a unique beauty that creates a harmonic blend, ideal for everyone.